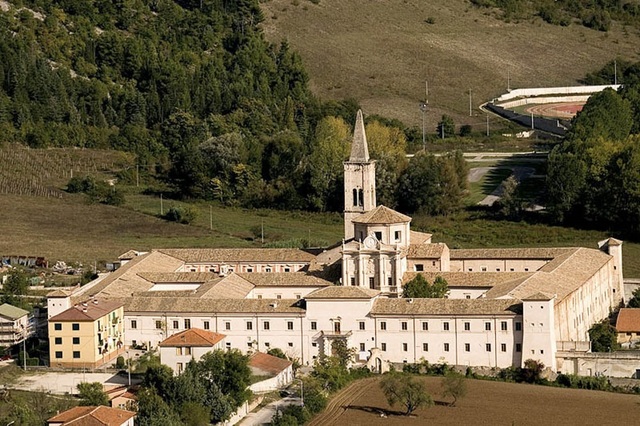 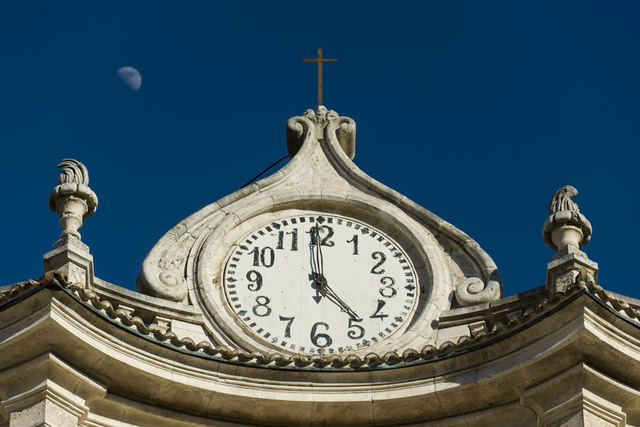 
The abbey was built around the middle of the 13th century at the foot of Mount Morrone, by the future Pope Celestine V, by the expansion of an existing chapel dedicated to Santa Maria del Morrone. Then, towards 1268, a new church dedicated to the Holy Spirit and the adjacent convent were constructed.


In 1293 it became the seat of the Abbot General of the Order of the Celestini, founded by Fra Pietro. The following year, with the rise of the latter to the papacy, the monastery received many privileges and property thus acquiring great importance. In the 16th century the complex was restored and enlarged and in 1596 a square bell tower, with mullioned windows on all four sides and crowned at the summit with a pyramidal spire, was added. Extensive damage was caused by the earthquake of 1706, after which many changes were made right up until 1730, as documented by the date visible on the clock of the church.


In the early 19th century, with the suppression of the Congregation of the Celestini, the long history of the various different uses of the monastery began.  It first became the Real collegio dei tre Abruzzi, then a hospice, then the Real Casa dei Mendici dei tre Abruzzi up to 1868 with its final use as a prison. This resulted in significant changes to adapt it to each specific function, ceasing in 1993. Since 1998 the abbey has been assigned to the Ministry of Heritage and Cultural Activities and is the regional headquarters of the Superintendent of the B.A.P., the B.S.A.E. and the National Park of the Majella.


The two portals called "the fiefdom", placed symmetrically in a diagonal position outside and opposite the main entrance of the monastery, gave access to the land holdings of the abbey, highlighting its wealth and prestige. These date back to the 18th century and both the piers and the round arch are decorated with diamond shaped indentations. At the centre of the gable end, enclosed by side scrolls, there is a coat of arms with the emblem of the Congregation of the Celestini: a cross intertwined with the initial letter S for Spiritus. The main entrance to the monastery, the work of Rainaldi Catterino of Pescocostanzo, features a round arch, framed by trapezoidal rows of smooth stone and flanked by two pillars made up of alternating cylindrical and rectangular drums. The capitals serve as ledges for the balcony above, which features an elegant window with a moulded frame, little side ears and a curved broken tympanum. The lobby is decorated with a trompe l’oeil with portraits of the King of Naples, painted in monochrome in the first quarter of the 18th century by the monk Joseph Martinez. Surrounded by a massive curtain wall, the body of monastery is built around five courtyards of different sizes. The two smaller ones, one in fact called ‘small’ and the other "oven", are located in the left wing and are part of the original settlement. The central courtyard is called "plane trees" and gives access to both the church and the last two courtyards which are the so-called "court of nobles" which is quadrilateral with Doric columns and is situated to the left of the front and the "well" on the other side which remains unfinished.
On the ground floor one of the most striking areas is undoubtedly the refectory - with two entrances preceded by twin curvilinear staircases - covered by a barrel vault with lunettes and decorated with monochromatic wall paintings from 1717-1719. These were painted by the oblate Martinez, in rich stucco frames, and feature episodes from the Old Testament such as the Marriage at Cana, stories from the life of St. Peter Celestine, the ‘Virtue’ and, on the back wall, the Last Supper. A magnificent grand staircase leads upstairs to where the library was located and which was divided into three naves by twin columns supporting the alternating domed and vaulted ceilings. It is unfortunately devoid of its rich collection of books however the precious wooden furnishings of the original pharmacy have luckily been preserved. In the medieval-modern section of the Civic Museum at the Annunziata in Sulmona, among the various works from the abbey, are three painted portraits of abbots who were each at one time the head of the Celestininian Congregation and are pertinent to the monastery. There is also a pair of carved wooden stalls in walnut, perhaps part of the abbey’s furnishings. One of the benches has a raised central section and arms featuring sphinxes - probably for use by the abbot general - while the other is engraved with the date 1598.